There are sparrows living in the terminal building at National Airport in Washington. Clearly they have found an ecological niche and are making the most of it. I don’t know if they spend all their time in there or if they manage to get in and out. This is the sort of question that I would ‘Google’, but I was unable to connect with the internet. I was too tired to do battle with the technology, especially since I had just 40 minutes before boarding my flight to Toronto. Instead I sat in the boarding area and contemplated. There was an elderly gentleman sitting in there playing snatches of music on a French horn. This was designed to keep the waiting passengers amused I think. Unfortunately he was not very good and did not play any piece for long enough. One of the gate staff walked over, plonked himself in an empty wheelchair next to me, and gently rolled himself back and forth in time to the music while texting furiously. These are the vignettes of the departure gate.

The visit to the US capital city was to attend a meeting “Action on Extreme Poverty and inequality to end AIDS: Research Meeting on Social Drivers and Structural Interventions” hosted by the World Bank. It was interesting; I learnt a great deal and met many old friends. One is a colleague who worked in Geneva but, like so many lived in France where he owns a home. The recent delinking of the Swiss Franc and Euro effectively knocked 20 percent of the value of their house and will have had a really bad effect on the market for many of the established international agency employees. I watch as the value of the Canadian dollar falls, making my salary worth ever fewer pounds. And there is nothing we can do!

Back to the meeting, the key issue is that the needs for AIDS are rising but there is less money available. All in all it is a troubling reality. Choices will have to be made at some point, and I believe it would be very much easier to do this if it was clear the number of new HIV cases was declining. There was some good news. I looked at the 2014 UNAIDS report and wondered why Botswana was excluded from the top countries contributing to new HIV infections. The answer is there are now many fewer infections so the country no longer features in the league table.

Back in Canada there is a debate on what bird should be identified as the national bird. The official national bird of the USA is the Bald Eagle; of Swaziland the Purple Crested Turaco; South Africa’s is the Blue Crane. Canada does not have one (and in case anyone thinks England does, it is the Robin, but according to the Wikipedia entry this is unofficial). The Canadians seem keen on the Loon, which has a haunting call, but does not seem a good name for your national symbol. Another option is the Canada Goose, the problem here is it sounds dreadful. It will be interesting to see how and if this debate is resolved in this most democratic of nations. 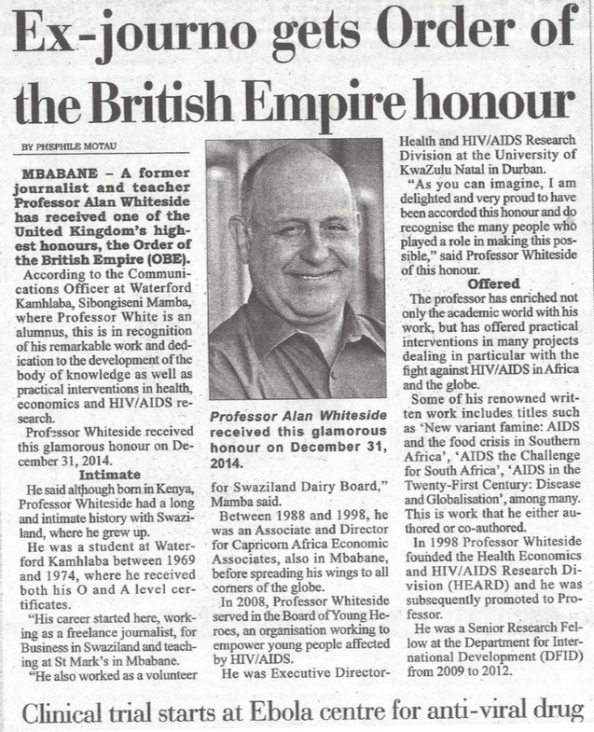 I was looking at a calendar that had no scheduled travel in it, but I am going to go to the UK for four days in late March to receive the OBE, it is so exciting. I have been in Canada for just over a year and this winter is significantly different from last. While it is cold, -10°C in the evening we have not seen the extremes that went on day after day last year. To put it in very practical terms. I have long underwear but have not had to use it yet. I expect that if we have some more snow and there is an opportunity to go either cross-country skiing or snowshoeing, both of which I want to do, I will dig it out and put it on.

This week will see me teach the fourth set of classes and that will be a third of the way through the teaching term. It certainly has been a learning experience. The students are keen and interested but have limited experience of the world. A number are the children of immigrant families and so come from backgrounds that have a rich culture. Unfortunately, and this is just my view at the moment, migrants tend to want their children to focus on the future and not the past. One of my aide memoires in teaching is to try to draw out knowledge from the students and their families even if it is not their own direct experience. It certainly is a change and a challenge, over the next several weeks I expect to start marking and that will give me an even better sense of how much they know and engage. I am rewriting the course for next year as I give it this year and discover what does and does not work.

And now for something completely domestic! Waterloo is a small town. Right next to my office is a decent supermarket, it is called ‘President’s choice’ and is as good as a Spa or Pick and Pay for my South African friends and a Tesco for those of you who live in the UK. It is possible to get almost everything one needs there. The main road in town has a number of high end shops but funnily enough nothing like a decent shoe shop. I am also within five minutes’ walk of the main Waterloo Public library which is great; except for the fact that the book covers in North America are so different from those in Europe I am having great difficulty identifying authors I want to read.

For clothes and shoes and other essentials everyone goes out to the Malls, and there are two in the region, one in the North called Conestoga Mall, and one to the south: the Fairview Mall. There is reasonable public transport through the twin cities of Kitchener Waterloo to the malls so people can get about. I personally detest the mall culture and have only been out there a couple of times.

One of the real joys though is Kitchener’s farmers market. This is held on a Saturday morning and it is possible to buy almost every foodstuff one would ever want there. I patronise an excellent butcher who is known in the region for his humane rearing and slaughtering of stock. Not only do they have first-class steaks, but there are a range of smoked meats and sausages. There are a couple of bread stalls and a gentleman who makes pickled artichokes and preserved tomatoes as well as a range of olives. He is always my first stop in the market and I then make my way around and fill my bags with the week’s provisions. Unfortunately it is easy to buy too much and I have to be very careful with this as I do not want to throw things away. Mind you even then one feels slightly less guilty: the levels of recycling are exceptional here.

I have been going into the office at the weekend, this has to stop soon as I need to do other things. I’m hoping that once the snow melts this can include running or, alternatively if we had a decent amount of snow, then some winter sports would be on the agenda. I have not been to the squash court for a long time. This is bad news as I paid to be a member for a year and am clearly not getting my money’s worth.

I don’t have a lot of news for this blog and the real effort is going into having the website redesigned and a mass email sent out about it. Interestingly when we sent a short note to everyone on my address list towards the end of last year, there were about 7500 emails, and well over half of them came back as undelivered. Obviously we either had them wrong or else people have moved on or died. This year we have gone through the entire email list and I have every hope that it will be a lot more efficient when we hit send in a few weeks.

Mr Turner. This is the story of the last part of the life of British painter J. M. W. Turner. It is the first film I have been to see in Waterloo and was really disappointing. It was far to long and there was not much of a plot. The character of Turner is played by Timothy Spall and that was one of the saving graces – he can act well. I guess the main lesson for me was that his prolific output and amazing talent did not lead to peace of mind or happiness. Cinema tickets are cheap here so it was not too great a waste of and afternoon. It is one of those gentle British films that sometimes work very well, but not this time, at least not for me.

One thought on “Birds and more birds”