I went to the UK for Christmas, and returned to Waterloo on New Year’s Eve. I don’t mind air travel, but the time change is tough, especially going to Europe, since effectively one ends up with a night of no sleep. It is however an opportunity to catch up on films. On the way to Amsterdam I watched “A Walk in the Woods”, which is based on Bill Bryson’s book of the same name. It tells the story of him and a boyhood friend attempting to walk the Appalachian Way. Perhaps the most impressive part of this is that they knew when they had had enough and agreed to stop. No false bravery in this tale. I saw half of the “The Little Prince”, the most famous work of the French aristocrat and pioneering aviator Antoine de Saint-Exupéry. It is a book I think is significant, and everyone ought to read it. I am going to develop a reading list of important books for students. This will be one of them. Other suggestions are welcome.

On arrival in the UK, I, buzzing with exhaustion still took a few minutes to look at my email. There was one from KLM saying, “We found something on the aircraft you just travelled on that we think belongs to you, tell us if you are missing something and what it might be.”

After some thought I replied, “I think I left my glasses”.

They answered I was correct and, as they noticed I was travelling on one of their flights via Amsterdam the 31st of December, they would deliver the glasses to me at the gate! I consider this to be amazingly good service since normally one expects things to simply disappear in to the black hole of ‘left on the aircraft’. My all-time best was to leave my computer on an internal flight in South Africa. Even though I remembered within 15 minutes it was gone by the time I got back to the gate. 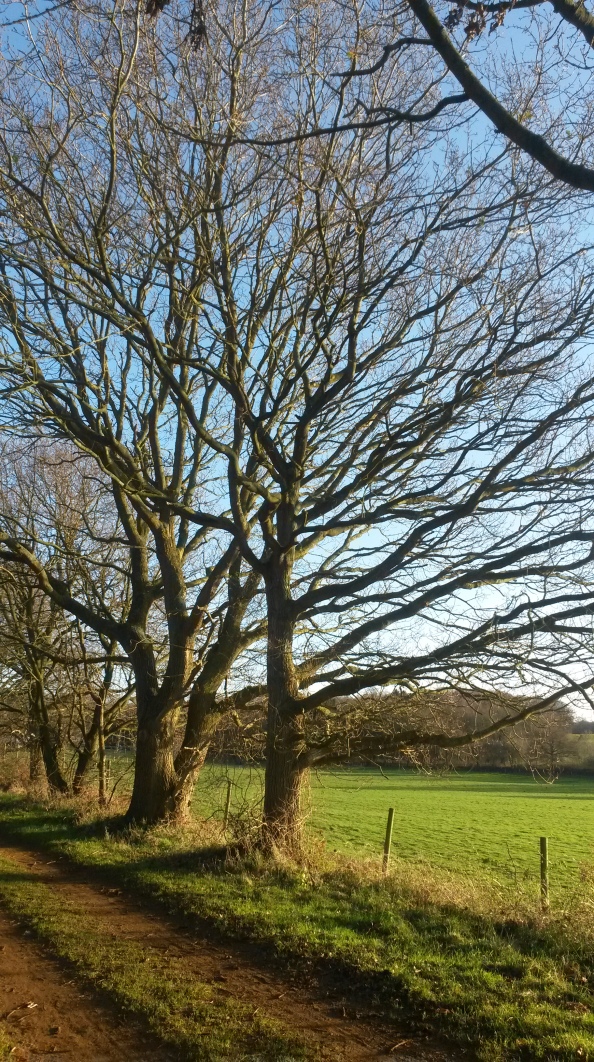 The Norwich Cathedral is a magnificent building. It was built over nearly a century beginning in 1096. The construction is flint and mortar and faced with a cream-coloured Caen limestone which was shipped from France to Yarmouth and then up the river to Norwich. The landing site was the present day Pull’s Ferry. I am not sure how the stone was transported for the last 300 metres; I think there may have been a channel dug from the river for this purpose. We went to the cathedral for the Christmas Eve service. This lasted an hour and half and follows a time honoured ritual for readings, lessons and the choir processing around the building pausing to sing in various locations. The place was packed, standing room only for most of the service. Do look at the Cathedral’s website.

I learnt one new important lesson from the visit (and relearnt one I should have remembered). The relearnt one was get there early, really early! The extended family arrived in four groups, the last person meeting us about 40 minutes before the start of the service, and the place was already full. The new lesson was about long term planning. Standing gazing in awe, at this amazing building simply takes one’s breath away. It is astonishing architecture and craftsmanship. The entire building, from spire to stained glass windows is remarkable. It is not gloomy even in the half light, and is full of whispers and gentle cross-drafts. There were at least two thousand folk in the building and it was a joy to be part of that massed congregation celebrating, not just Christmas, but also our city.

What is astonishing though is that no one involved in planning the building or laying the foundations would have expected to be alive when it was completed. What amazing vision and faith. And of course the question is why did they do it? What are the modern equivalents where a range of people can gather, ultimately to share a faith and belief system? Should we just remind ourselves of the phrase sic transit Gloria mundi, which for those readers who were not taught Latin, translates as ‘thus passes the glory of the world’.

It seems necessary to make the effort to enter a church, otherwise Christmas has evolved to become about consumption. The giving of gifts and eating of food that would normally be luxury or special are what should mark Christmas. The problem, in the West, is that it is increasingly hard to make it stand out, since we have so much all the time. I remember back in my youth in Swaziland, just before Christmas, we would go to the leper colony in beautiful Mbuluzi valley about 20 kilometres from Mbabane. Here we would give gifts and, I assume, money, and attend the Nativity play put on by the patients. This involved a real donkey and, most years, a real baby born at the institution in the previous months. One of the medical advances of the last 30 years is that leprosy is now easily treated and cured. However, untreated, it causes permanent damage to the skin, nerves, limbs, and eyes, leading to numbness. Fingers and toes become shortened and deformed due to infection and this was, of course, the source of the stigma. This was certainly the case for many of the people who were sent to the colony in Swaziland before treatment was available. It was a stark reminder to us youngsters as to how lucky we were.

I have now been full time in Canada for two years. I am finding it an intriguing place. The people seem straightforward, but in fact are complex and enigmatic. The Conservative Government of Stephen Harper was resoundingly voted out of power in 2015. Justin Trudeau’s Liberal Party won 184 seats and formed a majority government. The Conservative Party was reduced to 99 seats, while the New Democratic Party, led by Thomas Mulcair, won only 44 seats. In Quebec the Bloc Québécois won 10 seats. The Green Party won only one. I am increasingly of the opinion that the first past the post system does not serve us well anywhere. The options are complex and there is a fine balance between keeping people engaged and losing their attention. However we also need to remember that the right to vote is not a given, it is something that people have fought for and so where it is institutionalised it should be exercised.

Democracy needs to be revisited in order to make it more representative and responsive, while at the same time dealing with long term problems like climate change. On the television in UK we have been shown more ‘once in a life time floods’ over Christmas, this time in the north west. Finally someone went on air and said the idea of once in a life time no longer applies.

I am forced to conclude it is not easy being Canadian and liberal, or even just Canadian and politically correct. This was evidenced a few weeks ago with respect to the Miss World contest. The event was held in China and the Canadian contestant was China-born Anastasia Lin, a Toronto actress. Normally such an event would barely merit a mention in the Canadian media or even a slight tremor on the national psyche. In May, when Ms Lin she was crowned Miss World Canada, she was set to represent the nation in the international arena. When she tried to travel to the finals she was stopped in Hong Kong and denied permission to fly on. She said it was because she had (and this is true), spoken out against human rights abuses in the country. She is also a member of Falun Gong, a religious group persecuted in China.

The Canadian media was outraged at this. There were editorials and news stories condemning the Chinese actions. I don’t understand how an enlightened country can be supporting a Miss World competition in the first place. I mean, is it not demeaning to women in general? This aspect was generally completely overlooked, even among some of my new Canadian friends! Perhaps the right to be judged on beauty is also a ‘right’ to fight for. I need to think about this.

So this is the first post on my website for 2016. I will try to post at least every month. Looking back 2015 was an interesting and exciting year. I taught my first classes, recruited my first Canadian PhD students, and did a great deal of yoga. Globally there is a sense that people finally ‘get’ climate change, and perhaps there will be the actions needed. In this post, for anyone who reads this far, I talked about the vision of the cathedral builders in Norwich; the real meaning of Christmas and the need for serious political engagement. I am cautiously optimistic; I have always believed and acted as though we individually and collectively have the power to change the world, the bigger question is do we have the will?

Sarah Knights, Bloomsbury’s Outsider A Life of David Garnett, Bloomsbury Imprint, London 2015, 622 pages. This is a PhD thesis turned into a book. I have known Sarah for probably close to 25 years. She went to UEA some years ago to do a PhD in biography and this is her first book. It was one of my Christmas gifts. On first appearance it seems daunting as it is so thick, but when I opened it I saw that the typeface is a decent size! That on its own makes reading more of a pleasure. Garnett was a peripheral member of the Bloomsbury set, an exceptional group of British artists, philosophers and writers. They included novelist E.M. Forster, art critic Clive Bell, artists Vanessa Bell and Duncan Grant, economist John Maynard Keynes, writer Leonard Woolf, and novelist and critic Virginia Woolf. Garnett lived from 1892 to 1981, and was a prolific author, although most of his writings would be considered obscure today. Sarah’s biography is a very fine read, well written and engaging. Garnett was clearly a deeply interesting man. The book is packed with well researched detail. Well done Sarah.

William M Timlin, The Ship that Sailed to Mars, Calla Editions, New York, 2011, 49 pages. This large lavishly illustrated book is by a distant relative. Timlin was born in Northumberland in the UK in 1892. His family moved to Kimberley in South Africa and he joined them in 1912 and became an architect. Kimberley is where my mother was born to into a Northumberland émigré family. The story was originally written, as so many children’s books are, for the entertainment of his own child. He collected the drawings and the first edition was first published in 1923. William Timlin died in 1943 of pneumonia after fracturing his arm! This was in pre-antibiotic days. The story is of an old man who builds a ship, with the help of fairies, and sails it to Mars. Douglas bought me this for Christmas and I am very pleased to have it. This edition includes an excellent introduction by John Howe (although there is no information on who Howe is), explaining the time and space when it was written. He describes it: “Neither science fiction nor fairy tale, neither for children nor for adults, a hint of this true originality can already be glimpsed on the title page. Subtitled ‘A Fantasy’” the story is ‘Told and Pictured by William M Timlin’”.