In my last communique I reported I had received my first AstraZeneca inoculation. I have, psychologically, felt as though my immunity has been building day by day. I also noted I had not, up to then, seen reports of adverse events. Since then, things have changed specifically regarding AstraZeneca. We watched as, because of fears of side effects and reports of deaths, European and other governments banned then unbanned the vaccination, said it should be restricted to over 65s, and then changed to under 60-year-olds. At one extreme South Africa is reported to have sold all the doses they had obtained to other African countries. This morning, Wednesday 7th April the report in the Guardian notes:

‘Some UK drug safety experts believe there could be a causal link between the AstraZeneca jab and rare blood clotting events including cerebral venous sinus thrombosis (CVST). But they said vaccination programmes must continue, with risk mitigation for women under 55.’1

It is also difficult to make sense of the epidemic numbers. In the UK, the prime minister, flanked by Chris Whitty, the Chief Medical Officer, and Patrick Vallance, the Chief Government Scientist, use press conferences to inform the nation on what is going on with numbers and changes in the regulations. The official team is usually male, and when it is, it comprises two wise men and Boris! The data follows the same pattern: the number of Covid infections in the last 24 hours: 3,423 on 3rd April down from the peak of 68,053 on 8th January, the number of hospitalisations down by about 75 percent, the number of deaths (always prefaced by ‘sadly’), down from 1,348 deaths on 23rd January to just 26 on the 5th April. Finally they tell us the number of cumulative vaccinations, the good news, rose from 86,465 on 13th December 2020 and 31,523,010 on 3rd April.

As the months pass there is a growing sense of frustration and desire to open up societies and economies. The British Government has set out a road map to unlock the country. It was made clear that it was to be driven by ‘data not dates’. The schools went back at the beginning of March. At the end of the month people were allowed to meet outside in groups of not more than six. On the 12th April non-essential retail and restaurants and pubs will be allowed to reopen – but patrons will only be allowed to be seated outside! The one point we need to remember is that the return to pre-pandemic freedoms is still a long way off. Even if entertainment is allowed inside, then there will still be restrictions on the numbers, the idea of normal is not appropriate, we need to think of a ‘new normal’. The question on everyone’s minds was ‘can we go on holiday during the summer holidays, in Spain and Portugal for example’. The government remains extremely cautious on this.2

So where are we regarding Covid-19? The vaccination campaign has been extremely successful in the UK, thanks to the NHS. The number of cases globally continues to rise steadily and there have been over 132 million cases since the epidemic began. In this communique I am including two graphs from Our World in Data.3 The website I was most familiar and comfortable with is the Johns Hopkins Coronavirus Resource Center, for some reason it has been offline for some days now. The Our World in Data site uses the JHU data. I don’t understand why JHU is offline, and can’t find any reason on the website to indicate why this is.

The first diagram shows the daily new confirmed cases per million, a seven-day rolling average. The worst affected country over the course of the pandemic was Belgium. The second-worst was the United Kingdom, early in 2021. As already noted, the turnaround in the UK has been remarkable. Many people would ascribe this to the extraordinarily successful vaccination campaigns.

But the chart does not show unalloyed success. The data for Hungary show it had close to 1,000 cases per day in the past few weeks. The numbers have risen significantly in France, a cause of concern in the United Kingdom. The US, UK and South Africa saw their epidemics peak at roughly the same time, towards the end of 2020 and the beginning of 2021. In the case of the UK the turnaround has been remarkable. Why is there the increase in Hungary, France and Belgium? There are, in my view, no simple explanations. The vaccination programmes have made a difference, it has yet to be rolled out in France and South Africa. 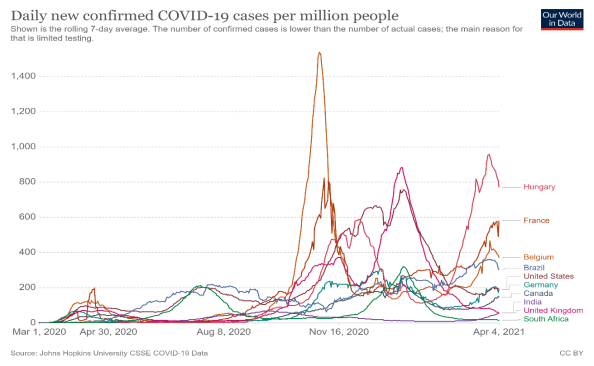 Daily new confirmed COVID-19 cases per million people, from Our World in Data

Looking at the data for the continent of Africa, it has about 1.65% of daily confirmed cases, South America 15.73%, North America 13.8%, Europe 20.7%, Asia 40%. It should be noted that China has virtually no cases at all.4 There is a sense among some that there is a cover-up in several countries and that China might be one of these. I might be proven to be wrong, but I think, remarkably, Covid-19 is under control in China. It should be remembered the public health restrictions can all to easily reinforce political ones. The pro-democracy demonstrations in Hong Kong now seem like a distant memory.

It is quite hard to make sense of the data on cases, deaths and case rates on anything other than an individual country basis. Over the past few months, I have seen the epidemic getting out of control in the UK and then have a very rapid fall. The second graph, see below, showing vaccinations is an illustration of possible causality. The more a country reaches its population with immunisation the fewer cases there may be, although this is not proven. What is known is that illness and death is lower among those vaccinated. This blog began with me writing what I thought friends and relatives needed to know. It has somewhat morphed with the ever-increasing amount of easily accessible information. I would advise friends to follow some of the links to the various websites.

I find it difficult to make sense of exactly what is going on with the apparent politicisation of vaccines, but there is one key message: the risk of death from Covid-19 is greater in people who are unvaccinated than those who are vaccinated. While this is true, I can see how the issue of whether to vaccinate or not might be a concern to some cohorts, for example, women below the age of 60 who seem to be at some risk of adverse events.

According to the 3rd April’s Guardian the UK’s Medicines and Healthcare products Regulatory Agency (MHRA) had received 22 reports of a blood clot in the brain — cerebral venous sinus thrombosis (CVST) accompanied by a low platelet count — as well as eight reports of other blood clotting problems up to 24th March.5 Germany had reported 31 cases of CVST after giving 2.7 million AstraZeneca doses, and nine people died. The response has been to suspend the vaccine for people under the age of 60, and in Canada under the age of 55. 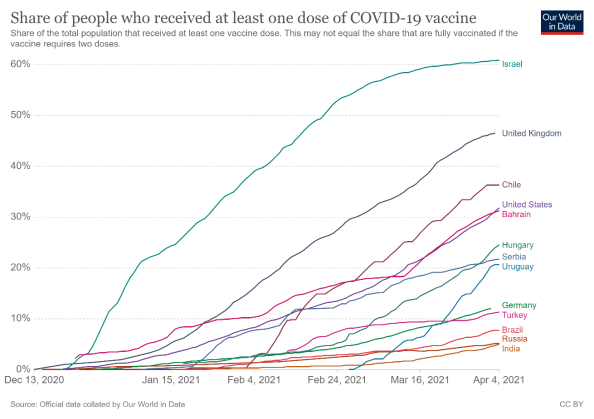 Share of people who received at least one dose of COVID-19 vaccine, from Our World in Data

The Observer, a British Sunday newspaper, had a useful article in their Comment and Analysis section ‘Undermining the AstraZeneca jab is a dangerous act of political folly’ by Robin McKie.6 This suggests that the vaccine is ‘under hostile scrutiny’ and ‘Not for the first time this vaccine has become enmeshed in geopolitics and its usefulness questioned’. The vaccine was approved by the European Medicines Agency (EMA).7 The website notes ‘Vaxzevria (previously COVID-19 Vaccine AstraZeneca)’ is authorised for use in the EU’. I would note that a name change, if that is what it is, will need to be carefully managed!

The issue of safety was well covered by The Atlantic on 30th March under the heading ‘We Need to Talk About the AstraZeneca Vaccine: For the moment, reports of a very rare, dangerous blood disorder among recipients cannot be ignored’ by Hilda Bastian. As Bastian writes,

“None of these critics said that potential risks should be ignored. They argued instead that, given the available data, the known harms from COVID-19 were clearly many orders of magnitude more significant. The cost of losing time from a temporary pause in vaccination was therefore disproportionate and unbearable; worse, it was likely to exacerbate concerns among vaccine-wary Europeans. Indeed, close to 60 percent of French adults now say they have little or no confidence in the AstraZeneca vaccine; similar poll numbers are turning up in Germany, Italy, and Spain”.

There is a very real danger of fuelling anti-vaxxer causes and vaccine hesitancy.

While confusion reigns in Europe, as can be seen on the chart the UK and USA continue to roll out their vaccination programmes (Israel, the top nation, is only now starting to provide this for Palestinians). In the US President Biden has named Gayle Smith, a former U.S. Agency for International Development (USAID) coordinator under the Obama administration, as the coordinator for the Global Covid Response & Health Security at the State Department. The message is that the US is looking at how to share vaccines around the world.

“U.S. effort to boost its vaccine supplies to the rest of the world comes as Washington works to push back against China’s widening vaccine diplomacy. Russia has also offered several million doses with financing to an African Union (AU) purchasing scheme”.

I believe the vaccine situation will be clearer by the time I write my next communique. One question that has not been answered is should children get vaccinated? It is being hotly debated.

We also need to discuss and communicate as to what level of risk we are prepared to accept in any society. How do we discuss this in a realistic manner? I also want to start focusing on what happens after the lockdowns are lifted. The 12th April is the big day in England, so more then.

Thank you for reading, reposting and providing comments. What I write is public domain so please share, forward and disseminate. My contact is: awhiteside@balsillieschool.ca