I got back to Canada on 18 February after a short visit to the UK. It was, in my view, just long enough to thaw out. Of course most of the west of the UK was experiencing some of the worst floods on record. It looked quite desperate for many homeowners and farmers. Fields in the Somerset levels are still under water.

There was more snow in Waterloo and it continued to be bitterly cold. The time there on this visit was a little curtailed. I am getting a sense of the place, and what I need and want to do. Buying a car and finding somewhere to live is the next order of business.

I was invited to dinner with James Orbinsky, a colleague from the Balsillie Institute, and his family in a small town called Guelph. This is a delightful little place, only about 30 minutes’ drive from Waterloo. It is amazingly easy to get to places, without too much difficulty, with a GPS. I would hate to have to try navigating without this assistance.  The night was cold and snowy and I was a little bit concerned as to my lack of driving skills in these slippery conditions. We had a fun dinner and then I went out to my car. Not only were there 3 cm of snow that needed to be brushed off, but it was still falling. I briefly considered staying over. Then I had an amazing stroke of luck. As I turned onto the main road I saw a snow plow about 100 metres ahead of me. I was able to follow it all the way to Waterloo. We did not go fast, the snow plow and I, but we did get there safely.

I continue to go to yoga, the Moksha studio is heated. I asked what temperature they put it up to one evening and was told 36°C: “Oh, a good summer in Durban”. The people who teach are an interesting group; most seem to be involved in some form of further education. One trains yoga teachers and her website is www.pranalife.ca Another is a chartered accountant www.andthensum.ca and is doing an environmental MA. We had a conversation about her taking on my tax in Canada. I now have to complete tax forms in three countries: three times the amount of stress. This is one of the reasons for doing yoga. I think the revenue services collude with the yoga teachers across the world. Fortunately the British system is changing next year and becoming simpler, or so they say.

I have also been making use of the university gym. This has a private changing and shower room for faculty members. One has to have a code to get through the door. It is also used by the men who referee the basketball games. They all look very similar, wearing jackets and ties, and coming in with black suitcases with their kit. A sort of referee mafia!  Yesterday when I had finished training I went in to find one of the officials for the men’s game, which was scheduled to start an hour and a half later, sitting texting on his phone. The three match officers who had been overseeing the women’s game came in, it was half time, and they sat chatting. I was around the corner so could not see all of them. One was clearly unpacking his snack because I heard one of them say: “My word Brad that is a really big banana”. I left hastily as I could not stifle my giggles.

At the beginning of March I traveled from Canada to Geneva for a meeting of the Economic Reference Group of the World Bank and UNAIDS. This was held in Montreux about an hour and 15 minutes away from Geneva by train. We stayed in a hotel on the side of the lake. It has absolutely spectacular views of the snow covered mountains. Mark Bletcher from the Finance Ministry in South Africa is one of the co-chairs of the group. He is a tall, thin chap and he was good enough to invite me to run with him in the evenings. I did this with some trepidation. I thought there was no way I would be able to keep up with him, but it was not too strenuous and he was kind to me. We ran for about 35 minutes along the paths beside Lac Leman, enjoying the views and the chocolate box sunsets. 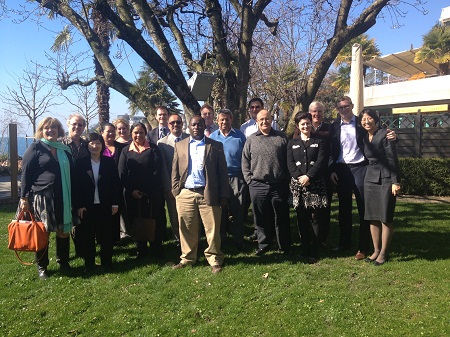 The Economic Reference Group of UNAIDS and the World Bank Montreaux, March 2014

On my final day in Geneva I met up with a colleague with whom I want to do some work. Robert Greener and I first crossed paths when he was in Botswana. He met me off the train and we had a working lunch beside the lake in the little town of Nyon. At the end of this he kindly took me to the airport. We used the delightfully named ‘Kiss and run’ lane – one simply pulls up, drops the passenger and drives off. Apparently, and fortunately, the kissing is optional. The airport was extremely busy as Saturday is the changeover day for the ski resorts and the Geneva motor show was on.

The journey back to Norwich with the change in Amsterdam was uneventful. Indeed most of my travel over this year has been that way: long may it continue.  Having the ‘Elite’ status flyer card is worth a great deal, it gives access to the lounges. It is the peace and space rather than the free food and drink that I value most. The plane from Geneva to Amsterdam was packed; the onward flight to Norwich had only 15 passengers on an aircraft that carries more than 70.

Back in Norwich the temperature, on the first Sunday in March, was an unbelievable 18°C.  We went out for lunch in the oldest pub in the city: the Adam and Eve which is located next to the cathedral. There was an interesting piece of street art beside the river. The old print works site is due for redevelopment and at the moment there is panelled fence along one side. Written on this is a ‘Renga word map’, basically ‘phases that make a poem to describe the character of the location’. According to the notice: ‘It is composed of linked verses on many different themes including history, topography, everyday life, economy and ecology’. It is very striking.

Joseph E Stiglitz, Amartya Sen, and Jean Paul Fitoussi, Mis-Measuring Our Lives: Why GDP Does Not Add Up, The New Press, New York  2010, 136 pages. This is the report by the Commission on the Measurement of Economic Performance and Social Progress which was commissioned by French President Nicolas Sarkozy. It is a short but dense book, and the graphs, in particular, require some considerable study before they are understandable. The authors’ note that the work of Commission was written largely by and for social scientists, but was intended to reach out more broadly.

There is an extensive preface, a forward written by Sarkozy and a long executive summary. There are only three chapters. The first looks at classical GDP issues, the second on the quality of life and the third, and probably most important, is on sustainable development and the environment. I have always personally been deeply concerned about GDP particularly since it is used to place countries into income categories, which establishes what sort of support they are eligible for and how they are viewed.

It is a last chapter that had me thinking the most. How do we establish what effect we are having on the environment? Can we see the current levels of well-being being maintained for future generations or will they decline? The one bit I underlined came from page 112:  “As for pricing environmental degradation, things turn out to be even trickier because of the absence of any market valuation that could be used as a starting point: in theory we must evaluate so-called “accounting prices” by modeling the long-term consequences of given changes in environmental capital and how they impact future well-being. But practical implementation raises considerable problems”.

Each chapter ends with recommendations, most of which seem like common sense. The ultimate conclusion of this is that we have to be more aware and the book proposes a dashboard system to keep us to achieve this and to help us react. Well worth getting and reading.