Last month marked a significant event in my life. On the 18th of March I turned 60. I must admit to being quite shocked by the fact this birthday finally arrived. It had to be noticed and marked in some way. We talked about Ailsa coming over to Canada, but as I am teaching, marking, and busy with the end of term, we decided she would come over a little later. She, Douglas and I have all been granted permanent residence, and all have to be here and visit the appropriate agency before the 7th June. If we don’t do that then we enter a bureaucratic limbo land. Douglas visits in early April and Ailsa in May. 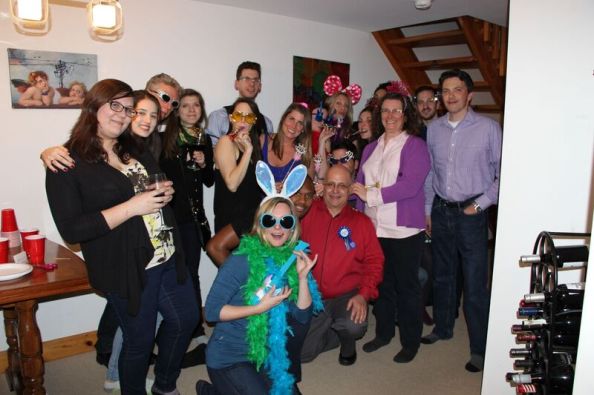 The party at the end of the evening.

I decided to have a party in the apartment to mark my rite of passage into a new decade. This was probably one of the bigger gatherings I have had. About 60 people kindly joined at various points during the evening. I tend to be very careful to not upset neighbours so there is a clear start time, and more importantly, end time, with guests being instructed to be silent in the halls. In addition, I put notes on all the nearby neighbours’ doors inviting them to drop by. The food was catered by Dana Rourke of: FoodNaturally. It was really great as it provided accurately for the number of people present, and that, in turn, meant for the first time I was not left with mountains of leftovers that no one wanted to doggy bag! No wastage, something to feel pleased about. There was plenty to drink as people brought wine. I was given cards and a number of gifts, which was sweet and much appreciated. 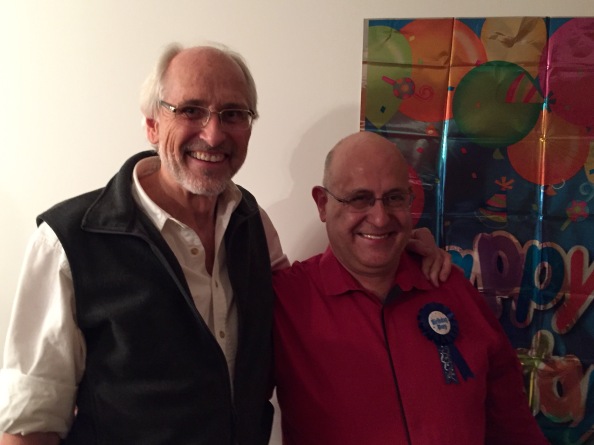 I think everyone really enjoyed themselves, I certainly did. I was abstemious in the extreme for the first part of the evening; the only thing I drank was some wonderful beer that is being brewed locally. Their brewery is called TWB Co-Operative Brewing and the TWB stands for Together we are Bitter. Ben Roberts, one of the co-op team is the partner of Margaret Walton-Roberts, one of the senior academics at the Balsillie School. Thank you Ben! Most people left the part by about ten thirty, but a few stayed to help me clean up. We then walked across the road to the Duke of Wellington, the local pub. All in all it was a great celebration with good wine and food and a photo booth set up very kindly by Sarah Stone (who took the photographs linked to this posting). Sarah is wife to the pastor of the church mentioned later in this posting. 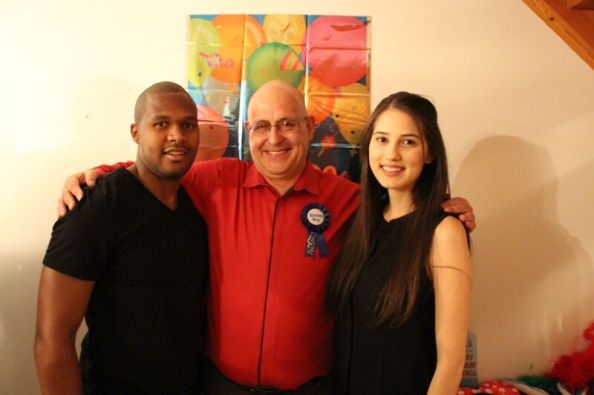 The students here very sweetly gave me a birthday cake. One photo is of me with Nathi Dlamini and Joanna Patouris, both of whom are Swazi and were at Waterford from 2003 – 2009. I so enjoy seeing them here. They are also especially thoughtful in helping make the event easy for me, doing door duty at the beginning of the evening as well as staying to sort out the flat and in sharing the last mellow drink.

I got a text from a well-meaning friend saying:

HAPPY BIRTHDAY!!!! A brand new decade. I hear most octogenarians say the 60s were their favourite decade

It seems this province (Ontario) has really weird weather at this time of the year. The temperature rose to a balmy 14ᵒC in mid-March then dropped to below zero. There was the first tornado of the year in Ontario. In addition there was an ice storm, which, as far as I can see, means freezing rain building up on buildings, powerlines and branches. It is actually very beautiful when the sun comes out and everything sparkles but does cause damage. In all likelihood, the worst of the winter is now over and the temperature for the first week of April is projected to be in the double digits. I have put my boots away for the year and the heavy coat is going to follow soon. It is not yet time to unpack the short sleeve shirts: this must wait another month at least.

I went to church on Easter Sunday in Waterloo. The pastor, Raja Stone, leads the Uptown Community Church and is coming to teach at my class. I am happy to show solidarity by going to listen to his sermon (occasionally). The congregation meets in one of the two Princess Cinemas in the town and I have also been going there to watch films as is shown in the reviews below. It was quite curious to be at a service in a setting where one is usually entertained. There is an emphasis on music: with a band at the front of the church with two female singers, two guitarists, a keyboard and drums. They were rather good but played few hymns I recognised, although the first hymn was Amazing Grace, sung to the tune: When the Carnival is over. The congregation is mostly young and predominantly female, and there is a crèche so that the adults can engage in the service without having to worry about little interruptions. What a change from my youth, when young and old sat through the sermon quietly behaving.

Rams (2016) This is a most unusual Icelandic film set in spectacular scenery. The story is of two brothers who farm next door to each other in a bleak Icelandic landscape. They have not spoken in four decades, sending messages via sheep dog! Then there is an outbreak of scrapie amongst their prize-winning herds of sheep (which they live for), and the story develops from there. I have really enjoyed the writing of Icelandic crime writer Arnaldur Indriðason with Detective Erlendur who in the books, grew up in such a setting. This film spoke across genres and is really well observed, the psychology of isolation and lack of human contact. Well worth seeing and it has won prizes.

Macbeth (2015) Wow, again spectacular landscapes. The Scottish scenes were filmed on Skye, the castle is Bamburgh on the Northumberland coast and the cathedral scenes are in Ely Cathedral. Macbeth is brilliantly played by Michael Fassbender while Marion Cotillard is Lady Macbeth. The scenes were, for the most past, gloomy and evocative. I think the story is one of what happens when grief is linked to ambition and leads to insanity.

The Lady in the Van (2015) This is the true story of the relationship between Alan Bennett and a Miss Shepherd who lives in her van which she parks, against his will, on Bennett’s driveway in London. She then stays for 15 years. Maggie Smith is absolutely marvellous as Miss Shepherd. I found the film to be a deeply thoughtful view of the way people adapt and allow events to happen despite themselves. The neighbours on the street where Bennett lives, and Bennett himself, are accepting of this bizarre (and extremely unsanitary situation). There is some involvement of the social services but it appears quite ineffective. I was pleased to read the story, in the film is pretty close to what actually occurred.

Joseph Boyden, “Three Day Road” Paperback: Penguin Canada, 2008, 416 pages. This is the first novel from Canadian writer. Joseph’s maternal grandfather, as well as an uncle on his father’s side, served as soldiers during the First World War, and Boyden draws upon a wealth of family narratives. This novel follows the journey of two young Cree men, Xavier and Elijah, who volunteer for that war and become snipers during the conflict. I wonder how many of these experiences were shared by my father.

One thought on “The Sixties, a Good decade?”