I finished teaching in Konstanz on Friday 3rd November. Rowan arrived on the Wednesday before this. The cancellation of a train from Zurich Airport meant she got in sometime later than we hoped. As predicted by the family, she got the bedroom and I took over the sofa bed in the apartment’s lounge. This made sense since I get up frequently during the night. She had only two full days in the town and we went to Friedrichshafen and the Spa, both second visits for me, but no less enjoyable. She came to class on the Friday, my last session. All students produced blog posts, those who wanted, have them posted with this blog.

On Saturday 4th November we flew from Zurich to Amsterdam and stayed in an Ibis Budget hotel not far from the airport. The actual hotel was very basic but entirely fine, the rooms sleep three people with a bunk bed arrangement over the double bed. There should, perhaps, be a warning “Beware of falling children”.

It seemed a very remote spot and I was not confident of our ability to get into the city. The receptionist said confidently that there was a bus stop across the road, and the bus, a number 193, went punctually every 15 minutes. I expected a lonely pole on the banks of a drainage ditch, but instead it was a busy barn sized structure with numerous buses. All we had to do was cross four lanes of traffic. We went to Leidseplein near the centre of Amsterdam, found a decent restaurant, enjoyed a good meal, and got the bus back with no difficulty at all.

On the Sunday we went to the airport and Rowan flew to Norwich while I got the KLM daylight 11 hour flight to Cape Town. I did not even pretend to work, but instead watched three films which I review at the end of the post, slept, read and sat and thought. When I got through immigration and customs there was a driver waiting to take me to the venue, the Stellenbosch Lodge, about an hour outside Cape Town. I had Monday to recover.

On Wednesday we began a three and a half day course on academic writing for African scholars. This was mostly taught by my colleague Tim Quinlan, with input from myself and Mike Schramm of NISC publishers. NISC owns the African Journal of AIDS Research, I am Editor-in-Chief. The whole event was masterfully organised by Nick Zebryk from Waterloo, and was funded (mainly) by the Bill & Melinda Gates Foundation.

After the course I went to Cape Town where, to my great good fortune, my brother had a spare ticket for a Cat Stevens’ concert in the fabulous venue of the Kirstenbosch Botanical Gardens. There is a natural Amphitheatre in the gardens. Everyone sat on blankets on the ground, picnicked and enjoyed the music. It was a real blast from the past. Cat Stevens was the one of the first records I bought in the early 1970s. Dusk fell, the music started, and an owl alighted in the tree above our heads. It was magical. 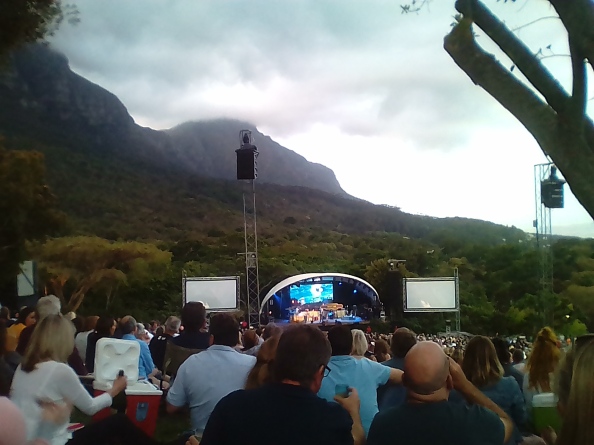 Over the past year I have been aware of a number of performers doing ‘final’ and ‘farewell’ tours. Not all should be though, but his voice and performance were very strong and he had a fantastic backing group. Cat Stevens was born Steven Demetre Georgiou in 1948 and grew up in Soho in London. In 1977 he converted to Islam and took the name Yusuf Islam. He then dropped out of the music world for 27 years. He talked about his faith but did not preach.

I flew from Cape Town to Durban on the evening of 15th November. My original plan had been to come to the flat for the night, then head for Swaziland on Thursday. It is a long drive and I was not looking forward to it, especially the last hour, when, almost inevitably, one drives into the setting sun. The airport in Durban is about 40 minutes north of the city. At some point during the previous few days I had an epiphany, and realised that, instead of going to Durban, I could drive for an hour or so and stop. The Trade Winds is a very reasonably priced hotel in Mtunzini, so I booked in. Fortunately I ate the mediocre roll on the plane, as by the time I got there the kitchen was closed. The end result was that I reached the Mountain Inn in Mbabane at about 3pm, and did not feel exhausted.

Most of my time in Swaziland was taken up with Waterford School business, but I did have a chance to meet colleagues from NERCHA. Our big triumph has been to produce a special issue of AJAR with Swaziland as the theme. The title of Volume 16, Issue 4, is What the world can learn from Swaziland. Particularly pleasing is the number of Swazi authors, many of whom had not published in an academic journal before. It took a great deal of work but was worth it.

I travelled back to Durban via the small border post, Emathatini, I mentioned in a previous post. On this occasion I asked the person on duty if I could please photograph the “No Corpses” poster. I was given permission so we are posting it in this blog, along with a picture of the lunch served at the school. ‘Pap and wors’ or in English maize meal porridge and sausage! The quality of the catering at the school has definitely improved. 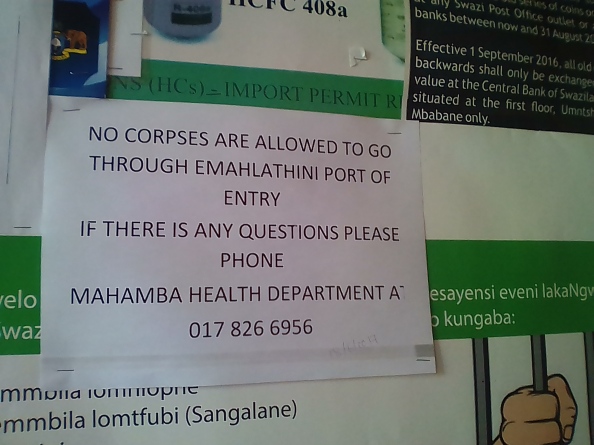 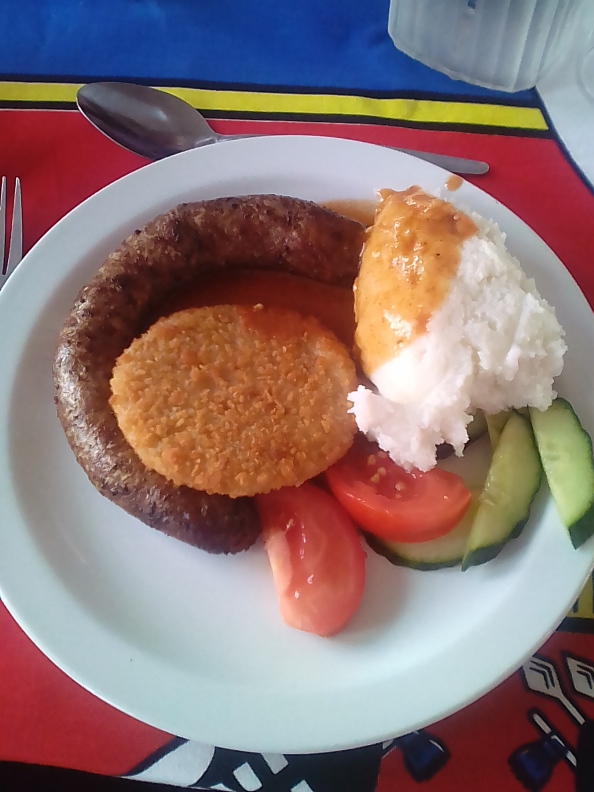 The Wizard of Lies about Bernie Madoff, who is serving 250 years in prison for fraud. The Wiki entry describes him as:

“an American fraudster and a former stockbroker, investment advisor, and financier. He is the former non-executive chairman of the NASDAQ stock market, and the admitted operator of a Ponzi scheme that is considered the largest financial fraud in U.S. history. Prosecutors estimated the size of the fraud to be $64.8 billion, based on the amounts in the accounts of Madoff’s 4,800 clients as of November 30, 2008”

It was a well-made, fascinating film about the damage he caused, and not just to clients either. His eldest son, Mark, committed suicide aged 46, and his younger son, Andrew, died of lymphoma aged 48.

The Journey, the true story of a most unlikely car journey made by Ian Paisley and Martin McGuiness during the negotiation to bring an end to the conflict in Northern Ireland in 2006. What would have happened if this forced period of contact between the two extremes of the political and religious spectrums had not been forced together? It was evident from subsequent news reports that the two men formed a bond that lasted beyond the settlement. The message I got is that we need to talk face to face. This is something I have always believed.

Collateral Beauty is a story about coming to terms with the death of a child. It stars Will Smith and was panned by the critics. I thought it was a good airplane film as emotions are heightened and critical faculties dulled.

One thought on “Driving and relaxing”